On a recent trip to West Penwith Orangehat met up with
an artist with phenomenal energy creating her
own waves on the Cornish Coast.
Joan Speight retired to Cornwall from the Cotswolds
after a career in local Government and the Foreign
Office. Enchanted by her new life and in a endeavour to
capture the beauty of her surroundings she
promptly took up oil painting.
Speight soon began to
develop her own unique
technique and colour
palette. With a new energy
and impasto mark making
she began to convey
her feelings for the
place she now called
home.
Speight later formed the Phoenix Art Group and with
mentoring from her close friend John Piper has now
established herself amongst her Penwith contemporaries.
A recent review entitled “Art To Fall In Love With”
by Mercedes Smith (MA) has further enhanced her
reputation and with work selling fast Joan Speight now
finds herself at the heart of the Cornish Contemporary
art scene.
When Joan Speight upped sticks to Cornwall the move
was a courageous one. This courage permeates her
work manifesting itself in emphatic mark making
and bold use of colour. The paintings themselves
are visually arresting and work on several levels
thus encouraging the viewer to return to the image
again and again.

With two exhibitions planned over the Summer and her
work already winging it's way to the US -  Don't say I didn't tell you - Joan Speight is a name to watch closely.

Oh and when you phone her -  she'll probably be Jet Washing the Patio!


Joan Speight's paintings are available at http://www.orangehat.co.uk
All photos © orangehat 2011
All images © Joan Speight 2011
﻿
Posted by orangehat at 22:20

Orangehat is in Chapel St Penzance to meet Anthony Frost. Anthony has just turned 60 but you wouldn't know it. Full of energy and life there is definitely something of the Peter Pan about him.


These days Anthony Frost creates his paintings in a large purpose built studio, light and airy it overlooks the sweep of Mounts Bay. It's a far cry from his previous studio, a pokey little net loft in which you couldn't swing a cat. The newer abode is however gradually beginning to take on the former's appearance with paint
splattered walls, stacks of paints, materials, finished works, notes, scribbled envelopes, cd's, invites and adhoc bits and pieces scattered in a kind of unique yet uniform randomness.

So back to turning 60 and Anthony has just thrown a party, taking over a local hotel in it's entirety and filling it with family and close friends. One of the highlights of the night was apparently a performance by Camborne Rappers Hedluv and Passman (Doin it Dreckly) featuring a singer who dances around in his underpants singing "We are Weird!"

You can check them out here: http://hedluvandpassman.wordpress.com/

Mark E Smith of the Fall was invited too enquiring after the nearest airport to Mousehole but only making it as far as Bristol (apparently he had been performing in Berlin) So by all accounts it was a night to remember or at least one that some wish that they could remember! 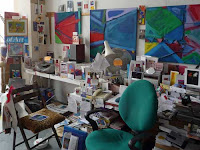 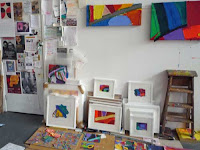 Following on from his late father Sir Terry was never going to be easy but with the passing years Anthony Frost has come into his own with a seemingly new found artistic confidence and self assurance.This not only openly translates into his paintings but also into all that he undertakes. Indeed he is a very busy man with numerous TV and Radio appearances, workshops on cruise ships, performing with his friends and poets Phil Bowen and Bob Devereaux and yet still managing to teach to a class of 'his' ladies and fit in his traditional coffee with his old friend and painter Bob Bourne. Add to this list the administering of his late Father's estate and you realise that how he finds time to paint at all is probably the biggest mystery.
Along with the increase in studio space has perhaps arrived an increased expectation, the passing of so many of the Greats of the 20th Century has left Anthony Frost as one of the elder statesmen and leading lights in the Cornish Contemporary art scene. One of many of a new wave of artists only too aware of in whose footsteps they tread.
﻿﻿﻿﻿The New Wave is definitely in safe hands.

Hello and welcome to the Orangehat Blog